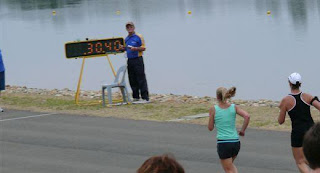 The exhilaration and astonishment from the past fortnight's events had only just begun to subside and I was already looking for something else to quench my desire to compete. Not because I wanted to try and win anything else, but rather I just wanted to feel those emotions attached to accomplishing something you thought you could never do.

Friends of mine at bootcamp were going to compete in a 5km Fun Run at the Regatta Centre. I wanted so badly to do it but I had not run that sort of distance since I had competed in the 14km City to Surf as a teenager. But what the heck. I never thought I could lose 20kgs and I did, this was just another thing I thought I couldnt do and I was going to prove myself wrong.

My twin son Kurtis also wanted to do the run with me. I think he had felt a sense of pride watching me overcome obstacles and wanted to do the same. I was so proud of him. We started together but within a kilometre I had to tell him to run like the wind. He was chomping at the bit to get going but Im sure he felt an obligation to stay with me. I was happy for him to enjoy his run and see how he would go.

I was struggling. Every fibre of my being wanted to stop and just turn around and go back after 1.5km. My lungs were burning and every stride I took felt like I had those 16kgs (weight to date lost) back on my shoulders. One of my friends Kim stayed with me for a while and kept giving me motivation to continue. I honestly thought I was able to motivate myself but it was quite clear that when things got a bit unfamiliar and tough my brain would try to revert back to its original way of thinking. Was I going to let it, NO WAY.

I decided to walk for a bit. This was the best decision I had ever made. Not only did it give my legs and lungs a much needed reprieve, but I was also able to focus on the fact that I now only had about 2.5kms left. I could do this. So up went the tempo from a walk to a slow run and I just stayed focused on my breathing. In, Out, In, Out. And with every step, I was a little closer to the finishing line. So much so I caught up with Kurtis who was trying to recover from a stitch.

After a couple of minutes walking we picked up our pace and caught up with Kim who had slowed down her pace to wait for me. The remainder of the run went by quite painfully I must admit. Even though my pace had not slowed any further, my calves felt as though every pint of blood in my body had settled into them and they felt heavy. Very heavy!

Kurtis once again took off and finished the race with a good sprint to the finish, and Kim and I gave it all we had right towards the end. I was so happy I finished it. I don't know my exact time but I think it was 31 minutes something. It doesnt matter really, I finished and that was all there was to it. I could tick off another accomplishment. I was on a roll.
Posted by Barbie at 3:52 PM 1 comments

My husband is a cheeky man. He is also very proud of me and always wants nothing but the best for the children and I. As he was driving home from the Sydney Aquatic Centre he rang the local newspaper and spoke to the head editor and told them about what I had achieved. I guess they must have thought it was a bit of interesting news because 2 days later I had a phone interview and made the back page with other competitors from the area.

How cool did I feel? About as cool as a cucumber. I didnt want this year to end. This feeling far outweighed all the hard training sessions and the times I doubted myself.

Everytime my husband Stephen holds my silver medal, all he says is "This is the closest I am going to get to a silver medal". But he has already won a gold medal, its the love I hold for him in my heart.
I am having trouble downloading the article so I have cut and paste it instead, here it is:
60 PENRITH WEEKENDER, October 23, 2009

4722 6693
WWW.WESTERNWEEKENSport T H E W E S T E R N
PENRITH VALLEY
WEEK-ENDER
FROM Prince Frederik of Denmark
capsizing in the harbour to 100-
year-old grandmother Ruby Frith
breaking the record in shot put, the 2009
World Masters Games were arguably the
most exciting yet, with over 28,000 people
competing across Sydney last week.
With baseball, canoeing, kayaking and
touch football all held in the Penrith area,
local residents got their fair share of the
action.
Local touch football team, the Penrith
Over 50s, scored silver in the Games, and
player Charlie Chrisostomos said the whole
team was pleased with the fi nal result.
“We made the fi nals so that was a good
effort for us,” he said.
“This was our fi rst time competing in
the Games and because it was being played
locally, that made it very easy for us so we
were pretty happy with how we went.”
Locals who competed outside of the area
include Luddenham competitor, Barbara
Hughes, who scored a silver medal in the
50-metre backstroke for swimming.
“It was the most exhilarating experience
to be involved in the event, you just feel on
top of the world and to get a silver medal
Story Stacey Hicks
was just the icing on the cake for me,” the
35-year-old said.
Other successes included a local hockey
team achieving gold and a Penrith netball
team achieving bronze.
“We had absolutely no idea that we
would do any good and thought we would
get smashed in all the games,” said netballer
Carolyn Morley. “But with determination
and team building, we surprised ourselves.”
The Games were marred, however, by
the unexpected death of an international
canoeist, aged in his 40s, who suffered from
a heart attack on the Nepean River during
the 21km canoe marathon last Wednesday.
World Masters Games Chief Medical
Offi cer, Jenny Saunders, said the organising
staff were saddened by the man’s death, but
all necessary precautions and actions were
taken to try to revive the man.