A chink in my armour.

First things first. We have a winner. Yep, you heard it right here. And the winner was chosen the old fashioned way. The kids and I thought if it worked for those people all those years ago before electronics became the way of the world, then why should choosing my winner be any different. So we wrote all the names down and their corresponding number of entries, then cut them all up and scrunched them all up and shook it all about. 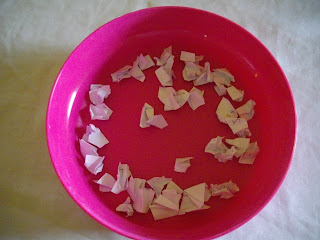 It was then time to pick the lucky winner. Taillah stood upon a chair and I had to reach up nice and high. No photos were taken of Taillah and I as we looked totally deplorable - hair everywhere, not a pretty sight. 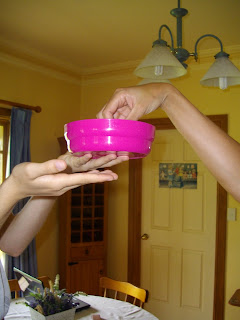 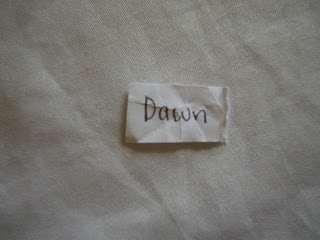 DAWN from Puzzle Pieces.
Congratulations.
Will send you an email so you can send me your details. Fingers crossed you get it there before Chrissy - I hope you enjoy it all. Doing this giveaway was heaps of fun and will have to hold another one post Christmas as this will give me time to think of some new stuff to giveaway.

Yesterday I had my first proper distance Sprint Triathlon. By proper I mean the swim distance was correct, not the abridged version of the TriShave Triathlon. And although the official times are yet to be posted I do have a rough idea of the overall time 1hr 22min. I am quite happy with this time because it was quite a challenging event due to Mother Nature.

The wind had picked up before we started the race and the lake which is normally pristine was now looking slightly choppy like the ocean. The good thing was, the wind was blowing in our favour for the swim. The guys took off at precisely 5pm and us girls took off at 5:02pm. Before too long I had started reeling the guys in. Normally not a bad thing but there were feet and bubbles everywhere in front of me. At times it was actually hard to know where to go and it was then the sighting came into play. This is something I definately need to practice as it made me very tired. I could feel my arms getting heavier and heavier with every stroke. 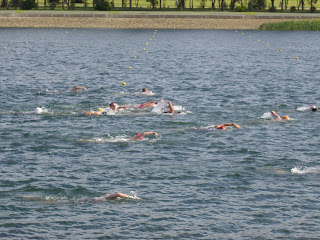 Where am I ?.
I knew when I took off that only one other lady had taken the lead and I was hoping as the swim continued that no other had crossed in front of me. I knew there was nothing I could do considering I really couldn't see too far in front so I just had to hope for the best. It wasn't until I exited the water and made my way into transition that the race organiser yelled over the mic "second female into transition" that I got excited and felt good about the swim. 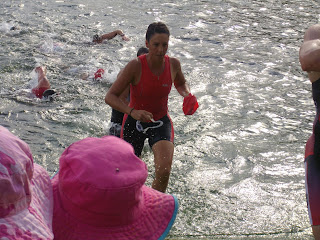 Transition 1 went well I think apart from the fact I am still not confident about having my shoes clipped onto the bike so I spend a bit of time then having to clip in once I leave transition. Never mind, another area I need practice and confidence in. As I headed off onto the first lap of the bike I was greeted with a horrendous headwind. I literally had to go into the small ring and middle gears to spin through the 2.5km distance of headwinds. My speed on this side was never more than 25km/hr but the effort used to gain that speed was up near the 9/10. I was hoping that the other side would give me some reprieve - and it did. I clocked close to 40km/hr and it was absolute bliss on this side. 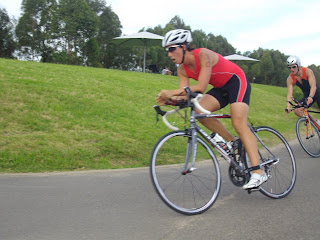 So four times over, headwind and tailwind and it was onto the run. I struggled abit in transition and could not get my sneakers on. My feet had obviously swollen quite a bit in the heat and I was struggling to get them in. With a couple of hard shoves and a few choice words to boot, I headed off hoping that I would not need to walk. My legs were once again nice and heavy and those first 2.5km were very painful. I remember saying to my coach who was doing the race and who so kindly held back to give me support about how heavy they felt. She said "not to worry, they will come good".

And they did but I then developed blisters on the arch of my foot. My legs by this stage felt great and I had this searing hot pain underfoot. I also had this lady behind me trying to mow me down. I could hear her heavy breathing closing in and everytime she got too close I increased my speed and pulled away from her. This cat and mouse game happened about 5 times until finally she relented and dropped off - my job was done. 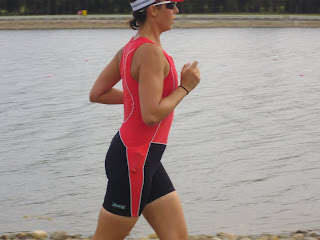 Not looking too bad.
Now what do you think? 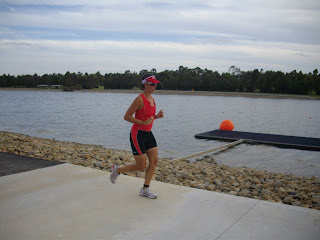 Flat footed and low to the ground. A typical Barbie run when I am tired. Thank goodness this was the last 150m before coming through the glorious inflatable finish line. Nothing looks better. 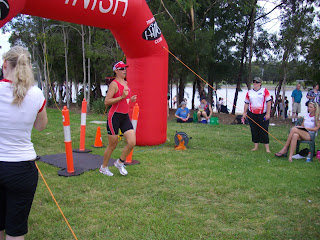 I was also greeted by my beautiful family. 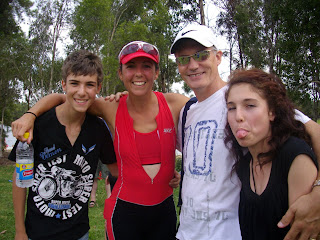 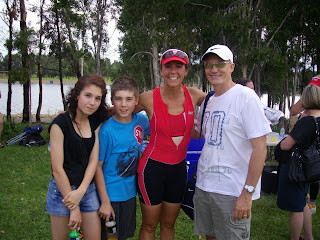 Coach was really happy with my performance and I was happy with how I went too. Now the arduous task of waiting lays before me. Will post times as soon as I get them.

This morning Elissa and I headed off for a recovery ride post race and it felt really nice just to get out and spin those legs even though the weather was totally questionable - cold and drizzly. We rode to Cobbitty and sat down and had a wonderful coffee and a feed for morning tea - mind you it was only 7:30am. It was so nice to just ride without having a set speed or objective to complete. We did 44km in about 1hr and 47 mins and felt really good when we got home.

In the afternoon we headed off to the TopNotch Christmas Party. I have since determined that after attempting an ocean swim, that this little fishy much prefers the confines of her fish tank. Yes, I am scared of the open open water. It's not the waves or the current that intimidates me, it is the fear of the unknown. I hate not being able to see the bottom and my mind was playing tricks on me.

I didn't totally freak out like "arms flailing and screaming like a lunatic" but rather this dread encompassed my body and if it wasn't for my innate ability to not be able to drown myself, I could have quite easily sunk to the bottom as my body became very heavy with fear. I remember looking at Elissa and saying "I can't do this, I'm scared". To which she replied "of course you can, don't freak out or you will have an asthma attack". I asked if we could do some breastroke and Elissa stayed close by my side. I then gained a little bit of courage and swam Freestyle and then swum like the wind back into shore. I kept imagining this surprise attack of a Great White or Bull Shark - and it scared the living daylights out of me. I promised I would own up to the "chink in my armour" for Alison. Here it is. You are braver than me Al.

But let it be known, the next time I tackle an ocean swim - it will not beat me. I will conquer this fear.
Posted by Barbie at 8:24 PM 9 comments