Are you TOUGH enough?

Hmmmm, good question. Not sure if tough or stubborn was the word - but TOUGH MUDDER 2012 was completed.

I don't think I have ever done anything that was so hard and so much fun all rolled into one at the same time. And I am so thankful that I got to share it with a great group of friends. Sadly one of my friends who had trained ever so hard for this came down with a gastro bug in the wee hours of the morning and was unable to join us. I felt so sad for Jennie. But I promised her some awesome footage for the day with my GoPro so she could feel a part of the day with us all. 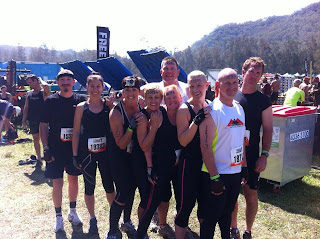 It was such a perfect day up at the Glenworth Valley. Sun was shining, birds were chirping, bugs were buzzing thanks to the gallons of mud and there were the faint yells of thousands of Mudders in the air. I must admit, whilst I knew this was all for fun I was nervous. Not because I viewed it as a race but because I really wanted to come out of it in one piece. No broken bones, no torn muscles but one heck of a sense of accomplishment with a bright orange headband.

I loved seeing everyone's faces - those that were going to start and those in the midst of it all. It was funny to see the change of expressions. And those who were in it had varying expressions too depending where in the 20km of Tough Mudder'stom they were in. It went from an "Oh yay, I got this" look, to a "Lord help me, Im exhausted" look. 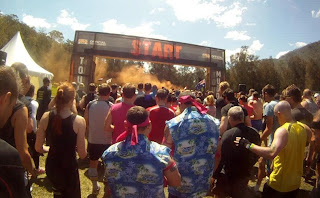 The costumes were hilarious too. There were fairies, businessmen, bow ties and not much else, tutu's and groomsmen. But the one thing that tied them all together was the fact that at the end "They were muddy mudders".

I must admit to not completing all the obstacles, quite frankly the ones I skipped scared the living daylights out of me. I attempted the first lot of Berlin Walls but not the second as it was higher and scarier than the first. And the electrical shock obstacles were a definite no go. The boys gave it a go and I must admit to  thanking my lucky stars that I chose to give this a miss. I never hear these guys grimace in pain and all I could   hear were yelps and "Oh my gods" as they came through. 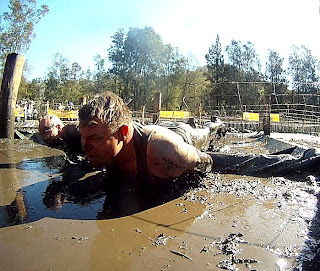 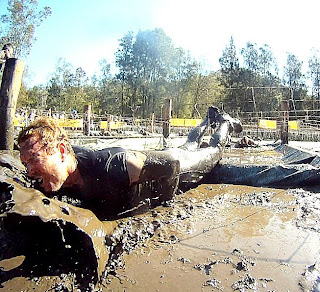 Sarah decided that she too wanted to do it "Touch Chik". I have never heard anyone laugh so much as she was getting shocked. All I could hear was "Eeee" "Ahhhh" "Oooo" and then as she got to the end Clair and I decided to help her out but got zapped in the process. We promptly dropped Sarah "sorry Sarah" and then continued to laugh. 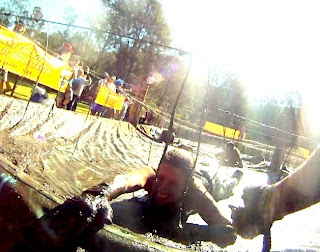 I really enjoyed all the water crossings. It gave us a chance to cool down, refresh the aching muscles and wash off the extra kilos of mud we had accumulated from the last lot of obstacles. 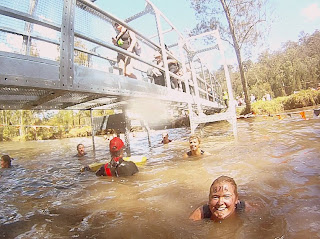 Between every couple of obstacles were seemed to be 2kms of running. Normally not a big ask, but after the 10km mark I was definitely starting to feel it. Legs were very very heavy and achey and my feet were totally engulfed in mud inside the shoes. To know there was still about 10kms to go was definitely challenging mentally. But we forged together as a group and made every obstacle as much fun as we could. 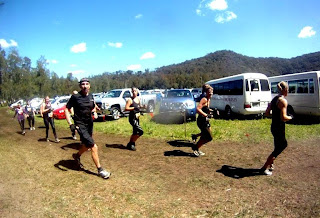 The obstacles I really really enjoyed were the ones with all the mud - stacks and stacks of mud and water. Apart from the smell it was really quite soothing. We were joking around about how we should all look 20yrs younger after being submerged up to our eyeballs in mud. It was so warm and smooth - like a big bowl of chocolate fondue. 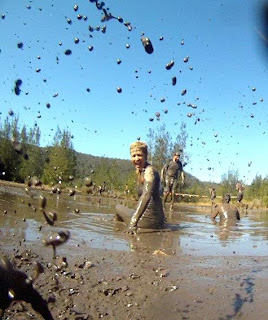 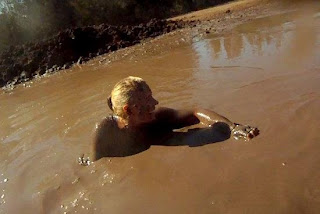 The tunnels were awesome. Stinky, sticky, squelchy and challenging but as long as there was mud and water Barb was as happy as a pig in mud - literally. 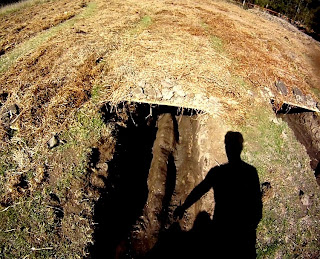 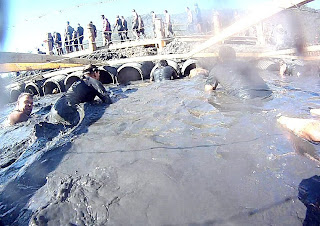 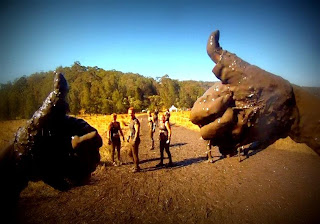 We had one big injury in our group - poor Sarah busted her lip open trying to scale the last massive obstacle. Luckily she didnt need stitches and to top it off she ran through the last lot of electric shock cables. You should have seen the looks she was getting from the spectators. 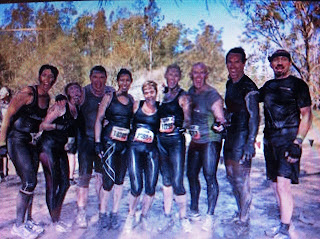 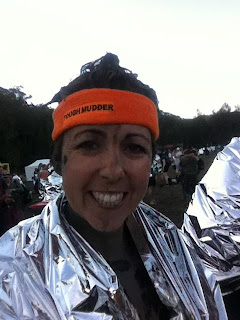 The end result was a very happy, tired, cold, muddy bunch of Tough Mudders. Glad we worked as a team and accomplished a mammoth effort as a group and great bunch of friends, and glad to be going home to a hot shower and much needed rest and Voltaren.

Would I do this again? Well, my answer sways everytime I think about it. One thing I know for sure is that I wont be doing anything like this again until after Ironman next year. But it was definitely a great opportunity that I do not regret in the least bit. I had a blast.