Today was a day that will forever stay etched in my mind for as long as I will live. I am sitting here trying to find the words to describe how I feel and simply cannot to give that it the justice it deserves. Never in my wildest dreams did I think I would encounter such generosity and I have been totally taken back and still to this moment have a knot in my throat.

You see I started out the day like any other day. Got the family ready for school and work, tried to work through a bit of stretching to get the old back feeling somewhat human, got my gear together and headed down to the pools. I worked through a 2350m session which went as follows:
During my swim I met up with the Pathers Tri Club president as he was testing out a wetsuit and I asked him if he knew of anyone who could loan me one because I wanted to do the first club meet back but the water would be freezing. He said he would ask his wife if she could loan her spare one. How nice is that, it never ceases to amaze me how forthcoming people are in the world of sports.

Anyway after finishing the swim session I went to go to Panther Cycles to pay off my helmet and ask about wetsuits and if they could get one in so I could possibly put one on layby. My poor husband Stephen, never knows what I will do when I walk in there. I try very hard to behave but my passion for my sport is a little too consuming at times. So, anyway's - Dave was willing for me to try his wetsuit and loan it for the Triathlon but Macca also gave me a new one to try on to see if it would fit. I go the low down on how to get it on but after bouncy around the change room and almost falling on my backside numerous times - I am thinking I need a Master's Degree in "wetsuit navigation".

I was all hot and bothered and was ever so vigilant in not putting my nails through the material. Hard work, but once it was on, it fit nice and snuggly everywhere, but I was now knowing how sharks could mistake humans for seals. I was feeling like an elephant seal in the suit, it shows off all the areas we woman would much rather hide. Nevermind, if that's what it is supposed to look like then that was what I was going to put on layby. Taking it all off was just as funny as trying to put it on. This will definately take practice.

So as I walked out I was now about to be made speechless. I was told I could take it home and practice training with my wetsuit whilst continuing to pay it off. My jaw almost instantly hit the floor and I got that knot in my throat. How does one repay that kind of trust and generosity. I wanted to give them all a hug, but not sure if some 36yr old lady going "all emotional" in the bike shop is good for business. So all I could do was say THANKYOU a million times over. You guys rock. Never did I think I would find such a great group of guys whom I not only call friends but I feel like in a way they are my family. You all hold a special place in my heart and for all your kindness I am eternally greatful.

So now, I was not only walking out of the shop with my new awesome helmet, I now had my very first wetsuit. What do you think? 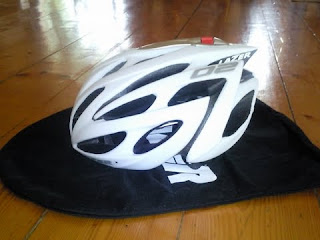 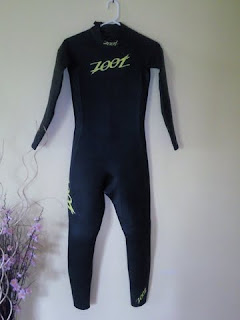 I am now well on my way to being a fully fledged Triathlete. I can now compete in the Club comp at the end of September and not come out feeling like a popsicle. I can now feel like a real part of this wonderful community who has embraced me with open arms. I have been blessed.