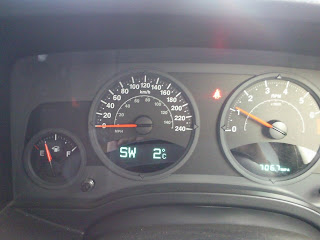 This is what was staring back at me this morning when I got in the car to take the kids to school. I wouldn't think much of it if I was going to come straight home, but that was not the case. Today's session involved a rectangular object which held gallons upon gallons of water. Good thing though that it was sunny, so that made up for it in a way.

We had a couple of regulars missing due to illness (gotta love winter), and their presence was missed. However, those that remained kicked out some awesome sessions. Mel, did a whopping 2km session. 2000m from someone who not that long ago thought that she would struggle with 300m and now she had energy to burn after 2k. I am proud of you Mel - well done. That deserves a gold medal award:

My session today was a little varied once again. What is that saying "variety is the spice of life". I think swimming is one of those sports where you have to keep on trying to mix it up a bit because a) you can run the risk of it becoming stale/boring, and b) by not challenging yourself with other strokes or varying distances you wont really see a big improvement. I don't want either to happen, I have too much riding on this. Big dreams lay ahead and I want to give it my all. This is what I did today:
I feel strong, now I have to transfer that strength to my legs. I shouldn't complain, they are feeling stronger too. I can now do the single leg bridges which about 10 days ago I couldn't - so that means I am gaining strength there too. But I would be happier if things would mend a bit quicker.
Posted by Barbie at 4:31 PM 6 comments