I did it, I did it, I did it. After all my whinging and whineing about how tired I have been and how I needed heaps of rest, I finally squeezed out my first CENTURY RIDE.
Was this my plan upon waking up this morning? No. The aim was just to go out for a 3 hour ride and just spend quality time in the saddle. After speaking to my coach she made it very clear that Aerobic means Aerobic. She doesn't want me giving 100% on every training session - and I know she has never expected it - the pressure I feel to perform is all in my own little head. It was good to hear her reinforce those words yet again. This gives me the permission to just go SLOW.
So I headed off at 5:45hrs to meet the girls at the Truckstop at 6:15. The air was unusually crisp at that time of the morning which made it a bit tough on the lungs initially, however as we headed off with the destination of Richmond-Windsor in mind it didn't take long for the lungs to feel better. Group riding is so much better than doing it on your own. Conversations along the way make for great distractions and moral boosting.
Most of the roads were sealed beautifully - that was until we hit just past Castlereagh/Agnes Banks and then it was as though the council decided "can't be bothered maintaining them". Pot holes, uneven surfaces, no bike path - no room for error. The majority of the outback roads were shared space with vehicles - so lucky it was a Sunday morning, it wasn't too bad. Would hate to see it weekdays - SCARY.
A section of our ride was a bit of an adventure - not quite sure if anyone knew precisely where we were going - so it made for a fun ride. We rode past alot of Turf farms and market gardeners doing their thing and a group of joggers getting in their long run before the heat of the day set in. The usual "Hey, how ya goin'?" is said as we rode past them with a prompt response of "Fine" as the sound of their footsteps disappears into the distance behind us. 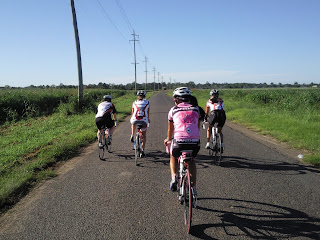 Photo taking and navigation on a bumpy road requires a degree.
We finally made it back to civilisation and stopped at the local servo - one to refuel and secondly to stretch. At this point we were at the halfway mark and I had already clocked 55km. I mentioned to the girls (as I did a little jig) that I think today was going to be the day I did my first 100km ever - much to the amusement of some random guy who was walking into the service station. I was so excited - I could taste the victory of my first major biking accomplishment. This was HUGE.
The ride home saw myself and Bernie get chased by some dog who thought we looked too good to eat. I have never, ever pedalled so hard and fast in my life - and boy - can dogs run like the wind. I was even contemplating should he catch up with me in unclipping and giving him a swift kick - but I didn't need to thank goodness (don't like animal cruelty) but he was scary.
Coming through the main town Cloe, Renee and Kylie headed off home and Bernie decided to stick with me back to home - thanks Bernie. As we got back to the local shops I had only 2.5km left to reach my first ever 100km ride. So I said BYE and made the last little stretch home - I even rode around the estate for about a minute just to make sure I didn't get home and be just shy of the 100km mark. When I finally pulled up the driveway - this is what I saw on my bike computer: 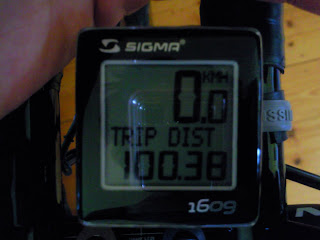