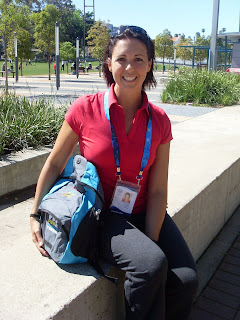 What a day. I was so excited. Susan and I were going to Homebush to register for the World Masters Games and recieve all our paperwork. The excitement I felt I could only compare to what an Olympian would feel just before their race. I knew the Masters games were popular but I didn't realise how popular.

Susan and i got to the venue just before 0900hrs. We went into the main arena and lined up with about 40 other people to start our registration paperwork. All went without a glitch and we recieved our backpack, lanyard with competitors pass, drink bottle and timetable for the events. After leaving the main arena we thought we would go buy ourselves some memorabillia however all attendants said that stalls would not be open until 1500hrs when registrations began. This was lucky incident number one. We actually signed up 6 hours early. Yee Ha. 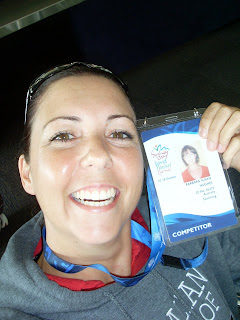 So we returned to the main arena at about 1400hrs after lunch to sit and wait for the stalls to open. Within half an hour or so, officials for the games starting locking these main doors and placing signs up stating the opening time. Funny thing was we were on the inside and Susan and I with about 100 other competitors were ushered in to the main arena as though we were something special. Lucky incident number 2.

Could this be the beginning of many great things to come. Boy, was I in for the shock of a lifetime.
Posted by Barbie at 1:59 PM 0 comments

So today was set to be the day. I knew it was going to be a hard session in the water. I had, I think about 2 weeks to go to the Masters Championships and I must admit I was feeling pretty damn good in all aspects of my life. My back was hardly hurting at all now and i was feeling strong. People were now commenting about how fit I look, versus how much weight I had put on, and gees "You look puffy".

So anyway, back to the reason of this post. I knew it was going to be hard. Barry would give me my session a week in advance. I was scared. I was doing 4x175m Freestyle and 4x175m Backstroke all at about 85%.

I started off with the Backstroke seeing as it was my favourite stroke and knocked those out reasonably well I thought. I was finishing each 175m Backstroke with enough breath to continue talking to Barry and my best friend Susan. Anyone who knows me knows I like to have a good gas bag...

The Freestyles were set to be another story. The first one came and went without too much hassle, the second had me feeling light headed. Now the third one was a doozie. I remember touching the wall and looking up at Barry and Susan and wondering "why are there two of each?". My body had gotten the shakes so bad all I could do was walk about 2m to a bench at the end of the pool and there i sat for a little bit. That was until someone turned on the saliva tap in my mouth.

I felt so unwell but wishing at that point I had not eaten baked beans and toast for breakfast. The thought of that making its way up was just TOO MUCH. The bathrooms were too far away and I knew that I didnt have the energy to get there anyway so the closest thing were some bushes. Luckily all I did was heave. My stomach started to settle after some water and a couple of Glucodin tablets, courtesy of Susan. I can recall just sitting at the table back at the other end of the pool and Barry giving me 15 minutes of respite and then being told I had one more to go. God love him!!

I requested another 5 minutes of rest and then churned out the last 175m and thanked God it was over. I had done it. I had almost spewed and survived. Nothing was holding me back.
Posted by Barbie at 9:52 AM 0 comments