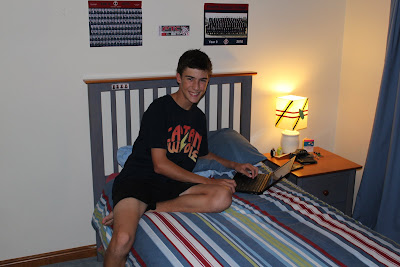 Twas the night before his first Triathlon and Kurt was just chillin' in his room. I am sure he was feeling that dreaded anticipation that I often feel and just look for silence to help ease the nerves. We had already prepared everything and checked over it about a Gazillion times to make sure there was nothing missing. 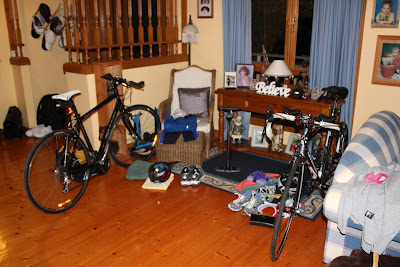 As he headed to bed early after spending the afternoon celebrating my 37th Birthday with the family, I gave him a big kiss and told him that we will be up nice and early and we will be celebrating his first ever Triathlon accomplishment. 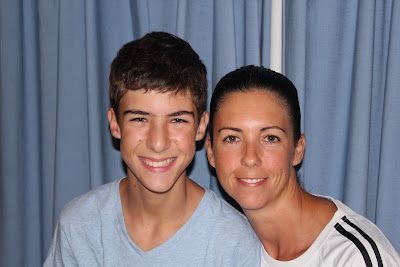 When my alarm went off and it was time to wake him up I half expected the usual teenage grunt and groan, but not this morning. He jumped out of bed and came out ready, but struggled to eat his breakfast. Nothing worse that that nauseatingly nervous feeling. But he managed to eat 2 pieces of toast with peanut butter and a banana. I was impressed, I think my first meal pre Enticer Tri was a few mouthfuls of Weetbix and a coffee. Before too long we were in the car and off to the Regatta Centre. 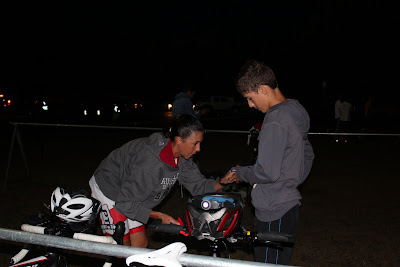 Transition setup went smoothly - Kurt really played a major part in setting his own area up and making sure that all his gear was in the correct order. I could really feel his nerves starting to increase and could see that the telltale dry mouth of nerves were getting to him. I just kept trying to reassure him and let him know that I was going to be there every step of the way with him. I was not going to leave his side. 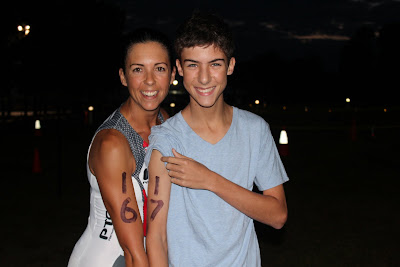 This mornings time before the race went really quickly for me - but I think it may have dragged on for Kurt. I was so nervous for him and really was hoping that he would be ok and enjoy it. So as we made our way to the start I really kept trying to stay up beat for him. 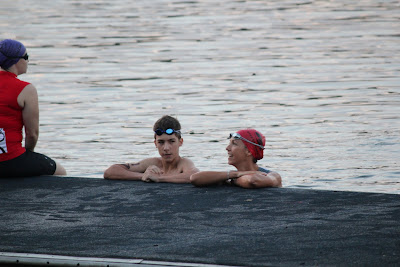 The water was cooler than I had expected and it really affected Kurt's breathing right from the beginning. That has happened to me so many times. It was also very dark and murky - I think there must have been quite alot of rain the night before. As the starters gun went off - Kurt and I hugged the shore and took our time. Kurt struggled to get adjusted to the darkness within the water but wanted to forge ahead anyway. I asked him on numerous occasions if he wanted to stop and he said "No mum, I want to finish". So I stayed right next to him and kept talking to him the whole way. 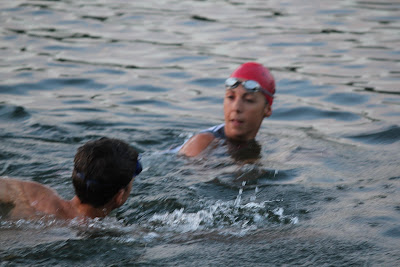 One of the officials told us we didn't have to swim the complete course but rather make a B-line for the ramp - which we did. I know Kurt struggled with this as it is so different to swimming in a pool and placing your face in clear, clean water - but I am supremely impressed in my son's strength of character and fortitude to have finished. I had to try really hard to not cry tears of pride as he made his way out of the water. If he had of decided then and there that he did not want to do this anymore I would have still been proud of him. 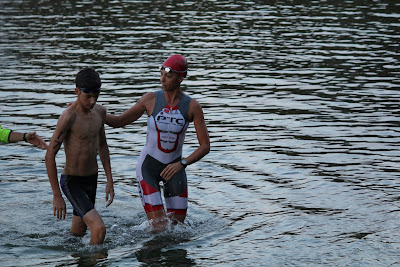 But, my son kept going and once out on the bike he managed to settle his breathing and was able to enjoy the remainder of the race. It was really nice to watch him enjoy himself as we played cat and mouse for the next 10kms. 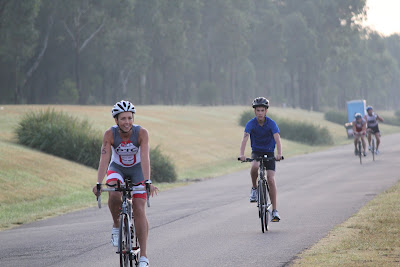 Coming out of T2 Kurt was focused on his run. He did get a stitch but we managed to get that under control at about the 1km mark and towards the end he had picked up the pace. Was he trying to race me? So I said, lets go and finish hard - which he did. 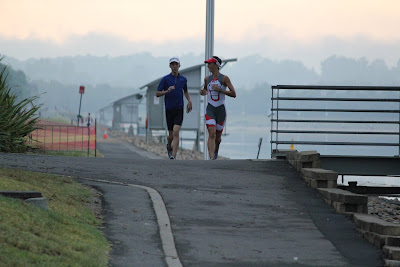 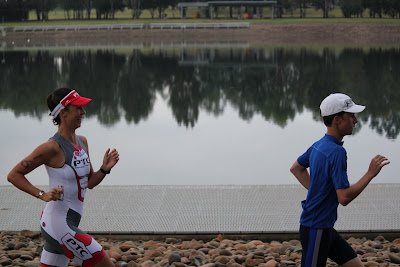 As we crossed the line everyone cheered him home. I could see they were all so proud of him for having overcome such a huge obstacle at the beginning and sticking it out to the end. I could not stop smiling the whole way - my boy is AWESOME. When we finished I asked him how he felt and although disappointed in his swim because he knew he could swim the distance but felt distressed by the open water situation, he was already looking forward to the next one so he can lay those demons to rest. I have promised him that we will make regular visits to the lakes and swim together with a spotter so he can become accustomed to the darkness and openness of the lake. By his next one - which we will do again together, I know for a fact that he will finish much happier within himself. 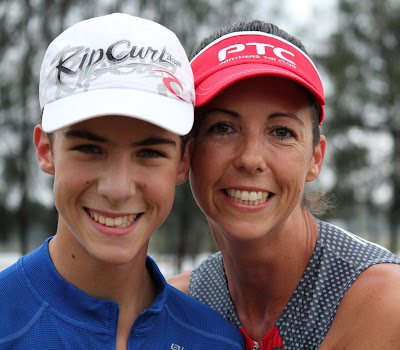 I love my son to bits, and know that he has overcome such a huge hurdle. I hope in the years to come that he can look back on this and know that anything is possible. He came across a mountain and hacked away at it till it became nothing more than a mole hill. Way to go Kurt.
You are my idol.
Posted by Barbie at 12:19 PM 10 comments