You can't just stay down.

Reality. Had I have read this last week when I got the news, I would have told Theodore where he could have put his quote. And it was some place that would have made it quite uncomfortable to walk for the poor chap.

Because something that I wanted to do really badly was taken away from me. Not because those who decided the fate were doing it to be horrible humans, they were doing it because that was their job. To look after their patients. But I didn't see it that way. My Ironman dream was gone. Just like that. All I heard was "Barb, your out of cycling for 5 weeks and then you need to rehab and strengthen muscles". I said "so that means I cant do Ironman" and she said "unfortunately no". From that point on I don't think I heard much more. I know in my head it is just a race, but really every race I have done has been used to take me a step away from the person that I was back in 2008/2009 when I started this whole journey.

I was angry. Angry that yet again I had to stop. Angry that my body was choosing to stop. Didn't it get that everything I was doing - the early mornings, the weightloss, the conditioning, good food, hours of training and trying for the last 4yrs was all for it. And once again it was like it wanted to set me another challenge - another wall to have to climb over. I was so FREAKIN' over having to start all over again. I wanted to just wake up and go out if I wanted to to and take my bike for a spin with my friends or go for a run (even if slow). I just wanted to BE for ONCE.

Sob story over. And I now whole heartedly agree with Theodore. He is quite a smart individual. All I needed to do was step back and look at what was right in front of me the whole time. Swimming has been what I have enjoyed my whole life. Swimming is what gives me comfort. Swimming is where I get the greatest peace of mind. So whilst I let the bones in my legs and feet heal, I shall swim. Well, I shall swim in about 2 weeks - self imposed complete and utter leg rest. And then - when that is done - I am going to swim until I grow myself a set of gills.

I have a goal. And for me it's big. I needed something to replace my BIG goal of Ironman. Im not ever excluding Ironman - but if I am completely honest with myself - shin splints x 3, stress injuries to my feet x 2 and twisted ankles x 3 (since 2009) is a pretty big red light warning of my body telling me it really struggles with running. Atleast thats how I see it. So my future I believe will be in team events for Triathlons where I can swim and ride or just do solo swims. This still puts a smile on my face. I still get to do things with my friends. So I am happy. A wise friend once told me "There is always something out there to challenge us, and the stuff that happens to change your plans is just that. A guidance, not an ending". Thanks Lance. 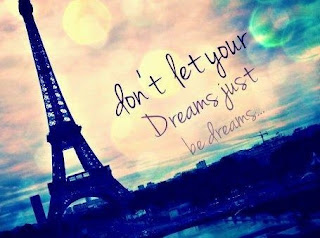 Im looking forward to my next challenge.

" There are no negatives in life, only challenges to overcome that will make you stronger."

Often the most unprepared activities are the ones that turn out to be the most fun. There is not that huge build  up of anticipation and fear - but rather and unknowing ease or beginners naivety. Whatever the case, when the idea was brought up to me during a massage with Kristen I got terribly excited about doing something I had not even dreamed of. I was already planning on doing the 3km but the concept of swimming 5km straight, thrilled me and scared me all at the one time. Swimming that distance in a squad set is very different to swimming it continuously without the aid of a wall to tumble turn off. But I was up for the challenge. 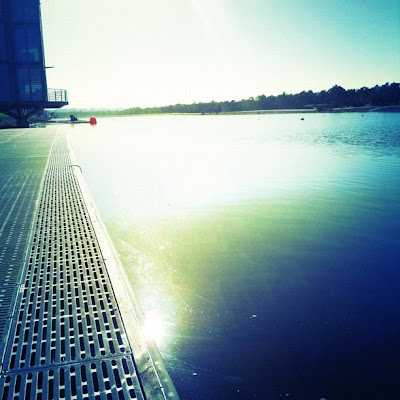 The Bridge to Bridge 3km is the competitive component of the day - you can then choose to do the swim through to the 5km mark. When I arrived at the Regatta Centre and saw how far up the markers were I must admit to feeling slightly anxious. It was so far away but the great thing is that the water is never choppier than the wind that is occurring on the day. So luckily it was nice and calm with a shower happening. It was great to catch up with a few friends on the day too who were participating and supporting - Clair, Louise & Andrew, Andrea & Rodney, Marc, Alan & Karen, Jen, Kimberlee & Brent, Kate & Paul. Plus my family as always was there to support me. Their un-waivering faith in me is something I can never live without. 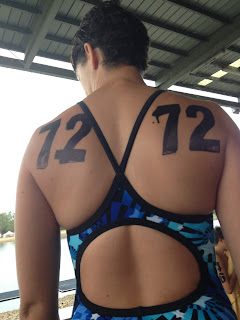 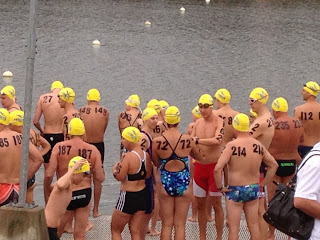 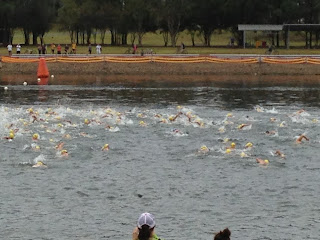 Before too long it was time to get in the water and find myself a spot where I knew I would feel comfortable. I sat myself to the far right of the first turn can and just tried to get as much clear water between me and the mass of arms and legs. As I turned that first can I kept looking up regularly until I started to notice a bit of a break that I could squeeze into. When I finally got in, I honed in the underwater rope that held up the row of small bouys. That way the only time I needed to sight was actually just to see how far the next turn can was away.

My goal for the first 3km's was to kick a nice good pace. Consistent rhythm, nice long and powerful strokes without overdoing it too much as A) I havent swum 3km in one hit and B) I still had the 5km to make. The first 3km's actually went by quite quickly. I spent the time singing, trying to spot fish and spotted the occasional floating yellow cap. I also spent the time imagining what it was going to be like swimming the 3.8km at Ironman and I tried to stay focused on keeping my breathing under control so then I could know what it would feel like.

I also tried to set small goals along the way like - trying to catch the person infront of me without using up too much energy. It was quite exciting to get a little competitive in the water and feel that I could make some headway. When I set my sights on a person in front of me, it was really cool to start spotting those little bubbles in the water which indicated that I was finally catching up to them. And then when I passed them, then I tried to get catch up with someone else.

As I reached the end of the 3km mark, a tiny little voice inside my head said "you can stop now, you dont have to do the whole lot". "Pfftttt, as if" said the other little voice, and with that I swam under the finish sign and made my way around again for the last 2kms.

The next 2kms were a bit more challenging in that the first turn can up the top end just never seemed to arrive and my that stage I started to get a bit of a hand cramp in both hands. I could only imagine that they resembled a birds claw after it had dropped off it's perch and taken it's finally flight to bird heaven. I tried to open my fingers and give them a bit of a stretch as I was swimming and before too long they settled down thankfully, but not before my feet started to do the same. I was also starting to get a bit thirsty. So to take my mind off of it I started to try to gain ground on the 3 people who were just ahead. 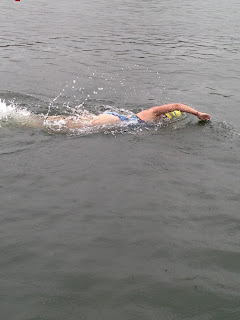 Little by little I inched my way closer until I finally overtook them too and then it was onto the home stretch. As I reached the pontoon just in front of the grandstand I noticed 2 very familiar faces screaming my name - Stephen and Clair. Clair had finished her cycling class at the gym not long before and came to give me support. Seeing those faces made me give it one last crack and I swam straight for that finish line. As I tapped the sign I had just realised what I had accomplished. Even though my arms were dead, I couldn't stop smiling. That was until it all hit me - system overload and it all started to switch off 3, 2, 1. Thanks Stephen for the sequential shots. 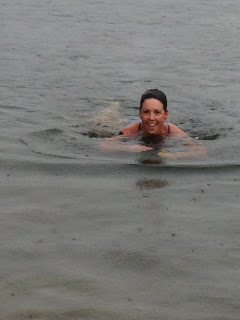 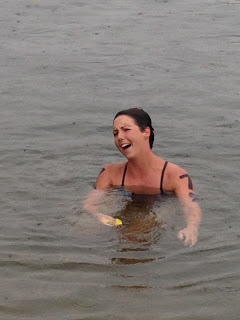 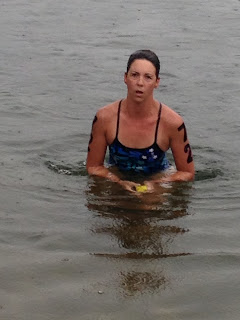 Could I have been happier - at that point I thought not. It wasn't until they started to call the age champions that I was called out as the first placegetter for the 35-39yr old women in both the 3km and 5km. I was so stoked. I had no clue. Kurt my son had kept that little secret from me as he had seen my name on the board about 30mins before. 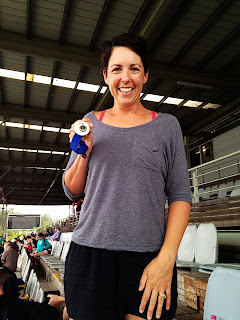 I really enjoyed the 5km swim - I had alot of time to think and to just be. I realised how much I love being in the water - how at home I feel. No pressures, no stresses. Just being me. It made me have really good insight into myself and what I enjoy most- and it was good as the next few days were going to test me.