I can remember making the decision to lose weight as scary yet totally exciting. I knew that this was more than likely going to be difficult, what I didnt realise was HOW difficult. I signed up for a gym and a trainer from the gym and sat down for the inevitable questions "What has prompted you to sign up?, What are your goals?". I knew I had the right answers but were they achieveable?
I started going twice a week, once with the trainer and once by myself and also swam once a week. Only swimming 500m at first - stopping every 50m. When I went to the gym however I felt quite intimidated by all the fit people. It started to not be enjoyable and I was lacking the enthusiasm to continue going. I tried to resolve this by going at a quieter time but I was just not comfortable at all.
My best friend who had seen me go through all my up's and down's suggested seeing her trainer who did bootcamps out in the open air. She felt he would be better suited to me and my needs and that the classes were not about "whose outfit was better" rather helping each person find what was right for them. Even with all of that I still felt intimidated by being around other people and felt I needed the one on one class.
When I met Barry for the first time I remember thinking to myself "This is the man who is going to change my way of thinking, this is the man who is going to help me lose weight and do it carefully". I remember thinking "This is it".
Posted by Barbie at 5:20 PM 0 comments 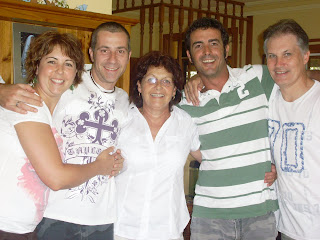 This was me on my 35th birthday. I was 88kg. This day brought great joy as I got to see my brother Mario (green and white stripe shirt) after some years, and it also brought great sadness and desperation to see how much weight I had gained. When I saw this photo on the view finder of the camera something snapped inside me and it was then at that very moment I knew things had to change.
Posted by Barbie at 1:39 PM 2 comments

Guess I should start by telling you all about myself. I am actually 35, closer to 36 but feeling more now like I am 18. I started swimming as a child due to Asthma. Found out that even though I hated it at the beginning - I was pretty good at it. Made it to State Championships within a year and Nationals when I was 12. By the time I reached 14, I found swimming to be "so last season" and quit.
In between then and 2008, I finished school - well to Yr 11, travelled a bit, found the man of my dreams (Stephen) and became a mother to the lights of my life - boy/girl twins Kurtis and Taillah who are now almost 14 and Kyle who is 11. I also finished my nursing degree in 2006 - which had been a goal of mine since I was 18. Tough going but I DID IT.
When my twins were born I had a very sore back for a couple months afterwards which didn't seem to want to go. Saw my GP and after Xrays and scans they found inflammation in my sacroilliac spaces. Referral to rheumatologist saw some more tests being done and initial management with medication. This made me feel like I had a constant headache which I wasn't happy to settle with so I stopped the medication and didn't go back. I figured that I had to take everyday as a new day and try not to overdo it.
That is until 2008. I guess 4 years of a degree, running around being a mum and working took it's toll. My back got worse and I just couldnt manage it anymore and intervention was needed. I returned to my rheumatologist (with my head held quite low) and new medications were given. They worked but the side effects were not pleasant. My hair thinned, I bruised, my memory wasn't crash hot and the weight gain was horrendous. 20kg in 6 months. EEEEKKKK!!!!!
So the GET WELL and WEIGHT LOSS journey began and who knew there was going to be some added benefits along the way.
Stay tuned!!!!!! The story will continue. I promise :)
Posted by Barbie at 9:45 AM 4 comments