Garmin Forerunner 110 - How I love thee.

How nifty is this little gadget. Not only is it stylish in design (black, sleek, non-cumbersome), the actual things you are able to do with it are just awesome. I have just spent the last hour and a half setting up my GarminConnect account and downloading my first ride on it. Being technologically challenged it took me a while to figure out how to change the run mode to the cycle mode but I finally figured it out. 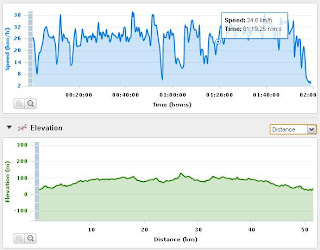 Today's ride was awesome - hard but awesome. I didn't do the distance I was hoping for - I was spent on the first hill, but nonetheless I still completed about 52km.
I have never ridden in such a huge group. There were about 40 cyclists - give or take a few - another thing I find challenging - guesstimating numbers. I think I did well holding a straight line, what I struggled with was my timing in letting those behind me know there was impending debris ahead. I too was aiming for everything that landed in front of me - very surprised I didn't get a flat. Elissa and I just kept laughing saying "Ooops, did it again". She kept hitting the cateyes.
I was in the front pack on the flat but as soon as we hit the first hill, that was it - I dropped off - quicker than I could say "dropping off". Frustrating, I totally suck at hills and wish I could be half as strong as my colleagues. They just zoomed past me like they were riding downhill. Drew once again gave me a push up that hill and as soon as I got to the top I stopped with Elissa. I then made the choice that I could not go the remainder of the hills and we both along with Matt took a detour to take us back onto the main road. Thankyou Matt for joining me on the ride back and having a great chat with me - you are a true inspiration. And Elissa, my aim is to ride like you one day - YOU ROCK.
Upon returning back to the Coffee Club I had the nicest 2 cups of Long Black and 2 Cinnamon toasts. As I watched everyone return from their full distance they were all saturated. They had hit rain on the way back and were completely soaked. Kind of glad that I turned around when I did but sad at the same time that I didn't feel up to tackling it. There is always next time I guess. I know when I get back from my holidays that my long rides with the girls are going to be hills after hills. The only way to get better at them is to do them. And that is what I shall do.
Posted by Barbie at 3:49 PM 5 comments