I have always been a fairly self sufficient kind of athlete having come from a swimming background. But if I ever had to choose someone to be my buddy in a team event, it would be Aaron. You see up till this morning Aaron and I had never met. We had simply communicated through emails and text messages after being hooked up through a mutual friend Cloe. And I really could not have asked for anyone better to be my buddy. We had said a couple of days before that we would meet up at our Tri Clubs tent before the race and get to say HI in person.

So upon driving in this morning I was really excited, not an unusal occurence for me, but for some reason I didn't have those usual pre-race nerves. There was something strangely calming about knowing I had only one leg to complete. That's not to say that I wasn't going to give this my all, but it now meant that I didn't have to try and conserve my energy for the other two, nor totally freak out about the fact I was going to possibly die on the run leg.

Upon arriving to the tent there were some team members there already getting prepped and sorting themseves out. The camaraderie amongst our team mates is awesome. No-one is ever short of a supportive word or equally a bit of sledging, it's all in good jest though. Before I knew it Aaron had turned up and we made our way to transition to rack his bike. Cloe had found us a fairly good spot which was close for me to get to him in T1. I left him there after some chit chat and said "see ya soon and goodluck".

It was about now that my nerves did finally kick in. My stomach started doing flip flops and my mouth got really dry and pastey. I needed water, lots of it and my best friend did her best to supply me with drinks of fresh water from her bottle. By the time my race was ready to start, it felt like the temp had reached 26 degrees celsius and that was at 8am. 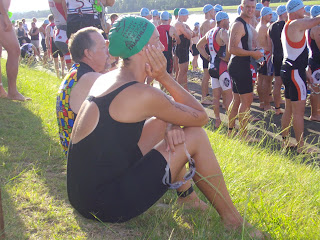 No sooner had the previous race gotten in the water to start, I quickly jumped in with my coach for a bit of a warmup, but it felt more like a cooling down (just what I needed). 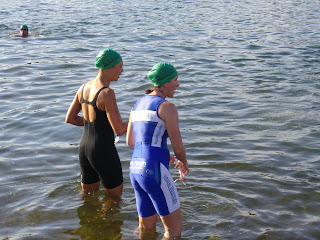 I started trying to figure out where I should position myself, you see some of the guys I was going to race against looked fairly tough and I simply didn't want to get smashed over. 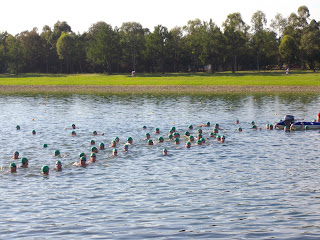 And as the race kicked off I took off as fast as I could so as not to get caught up in the whitewash. I could see some guys to my right and some guys to my left who were doing the exact same thing as me, and it wasn't long before two of them closed in quickly on either side and one swam straight past me. Then so did the other - awfully close though I might add. 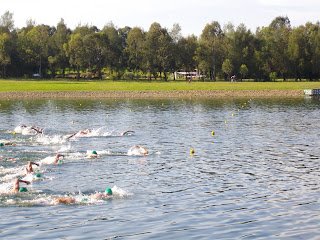 I thought I saw some others pass me and I was getting a bit frustrated but decided that there was no point trying to hang on and get totally spent trying to win, this was afterall my first 1km competitive swim. The swim just seemed to go on forever, everytime I looked to my right I thought "I'm sure I have seen that marker before". So you can imagine my joy when I finally reached the final bouy which signalled a right hand turn into the final 30m to shore. 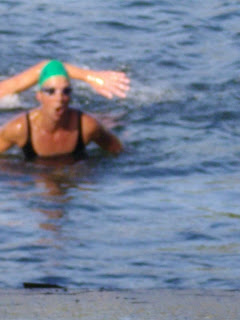 I was so excited to have finished, not because I had had it, but rather I think I did my best and gave it everything I had. My job was done and I think I gave my team the very best advantage I could. It was now Aarons turn to fly the "Team Nevermet" banner. I gave him a pat on the back, wished him luck and watched as he ran off into the horizon out of T1 with his bike. This was really exciting. 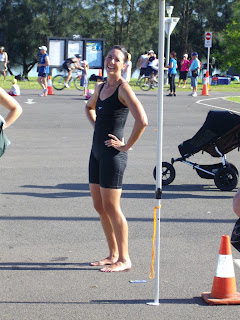 I only caught a glimpse of him on his bike leg and set my sights firm on trying to get some good shots of him on his run and make sure I gave his as much encouragement as possible. It was a stinking hot day and the mercury had risen to 34 degrees celsius by the time he started his run leg. 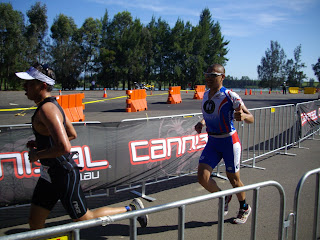 I really felt for him with this heat, but Aaron is a total legend. He smiled everytime he spotted me and would give me a thumbs up. So when I finally spotted him coming through with only 200 metres to go I ran beside him and took photos as I went. I wanted him to know that I was so happy to be part of this team. 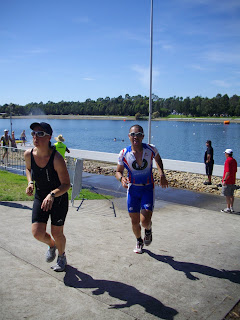 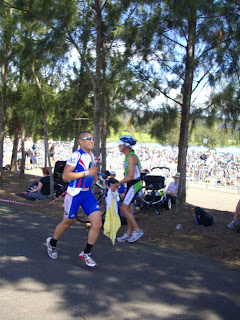 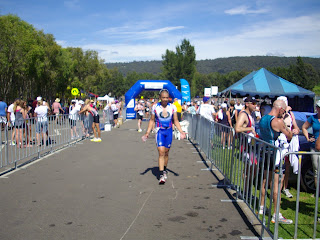 When Aaron finished I gave him a big hug and thanked him for being an awesome buddy. We scored a couple more photos and then we went back up to the tent and replenished some much needed fluids and sugars. 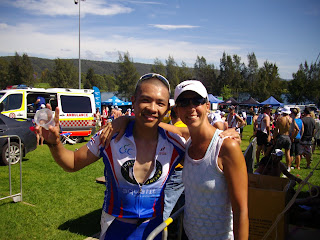 Aaron was really pleased with his times and I sadly could not give him my times as I did not have a stop watch, but as I got home and jumped on the Nepean Triathlon Website I was really shocked to see that race results were already up. So here it is: 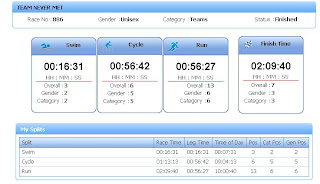 I do believe we did exceptionally well.
I didn't get passed by as many people as I thought. I must have been imagining those other swimmers. Aaron, I am so honoured to have had you as my buddy. Should you ever wish to do another team event, please do not hesitate in giving me a call. I think we make an awesome team.