After Sunday's hill climb I decided yesterday to go out and do it again, only this time I wanted to do 2 loops. And guess what, the second loop did not happen. My legs were cactus from Sunday and I barely made it up the hill the first time. I struggled big time and was sucking up alot of O2 in an attempt to make it up the top without getting off my bike. It worked but boy it was hard work. I finished the loop and as I was passing my home something in me said just to try for the second loop, but I knew that if I did I would be disappointed with the outcome - so I veered left and went in my driveway and retreated gracefully.

I retreated to a nice hot shower and loads of stretching as well as my usual daily routine of physio stuff. You know, I'm a little confused - even though I feel like I am getting stronger and more in control of my exercises given all the work I do, it's not the same with my stretches. Doesn't matter how much I stretch or for how long I am always supremely inflexible. It's driving me totally nuts and even Lisa shakes her head in disbelief as she can see how much effort I am putting into my exercises, so she knows I would be the same in the stretching department. Not quite sure what else to do.

So physio today proceeded like it usually does - me squeeling like a big baby and Lisa having a giggle because of all the noises I make. I should get award though because today I found out that "I, Barbara Hughes, have the tightest glutes she has ever felt in her physio life". I have knots on top of knots and with all those knots I have formed my butt. Everytime she goes to touch one of those knots I see stars, Mother Mary and all the saints. We were laughing today saying maybe they need to supply physio clients with a shot of valium or some scotch to ease the pain. It's just horrendous, I think I would go so far as to say I would prefer to give birth again. My poor little toosh is battered and bruised again.

And over the last 10 tens my back has started to play up again and I can feel the twinge of sciatic nerve pain rear it's ugly little painful head. With everything I have at stake here I will not let this take hold again so I have re-booked myself back in with the Sports Medicine Doctor for my second lot of shots. And this time I am not scared, I am ready - bring it on.

I have also been in search of a really good training cossie, but the knee length style. I absolutely love how they look and it also comes with the added benefit of not having to shave as often. I know "women's business" but it's truly annoying. The girl from the Speedo Shop in Bondi has been truly helpful an sent me an email with an image of the cossie. What do you think? It's row three and I will have the black one thanks. 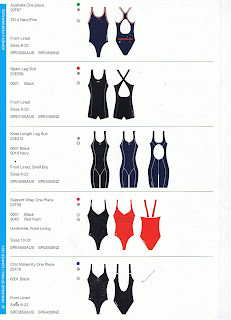 Fingers crossed I get it by Friday as I have a swim session booked for Saturday with the new Tri Club coach. Gotta look the part.
Posted by Barbie at 1:08 PM 5 comments