I don't even know where to start. The last 2 days have been well, what can I say - EPIC. Some of it has been totally amazing and fulfilling whilst other bits were anything but that. They were sad and heartbreaking and at other times down right scary. But I guess going through these things are supposed to make you a stronger person, and I guess that's right, just sometimes it feels like you wish it wasn't happening at all. I shall try to explain.
Saturday was by far one of the most exciting yet totally exhausting days ever in the training front. I joined forces with the boys and although scared and not sure how I would cope, I think I did as well as I could. Kind of fun keeping up with the boys - it was good to see just how far I could push myself. I managed to stay nice and strong the whole way through the ride even when we hit the notorious Greendale rolling hills.
Yes there were times when I got tired and dropped off slightly but I managed to reel myself in tightly to the pack and even got a go at hitting it hard at the front for a little bit. Now that was fun. Kind of an indescribable feeling. I felt strong. It kind of gave me the same feelings of when I used to do swim training in the old days and I used to train in the same lane as my brothers and the faster lot. I may not have always been able to keep up but boy it was fun trying.
So after finishing 71kms in in 2hrs 27mins it was time to now run 6 x 1km efforts off the bike. This was painful, my legs felt like they had been dipped in lead and I was having trouble coming in on the required 5:30. I was just scrapping in at 5:40. Needless to say when it was done, I made my way straight to the boat ramp, took my sneakers off and sat in the water. I was getting the strangest looks, but I didn't care. I was just enjoying the coolness of the water and trying not to get in the way of those people trying get their boats in and out of the water. I was also contemplating the fact that I now had to back all of this up with a swim.
Swim, although refreshing was probably the hardest session I have had to date. I was tired, my legs were cramping - so much so I had to do half of the main set using a pullbouy, and I was hungry. The main set was 6 x 400's trying to come in on the same time everytime - I did them all on 6:30. Alot slower than my usual pace but usually I haven't done everything else and I come to the pools refreshed. So 3500m later and I was done - 81km for the day and I was happy with my performance. Then that afternoon I went to visit my Uncle in hospital who is going through quite a rough trot with his health. He looked ok, just terribly bored and wanting to go home but he has to stay in till he has a few tests which will be performed this week. Keeping fingers, toes and legs crossed for a favourable outcome.
Then this morning it was game on again. Only this time with the girls.

I was lucky yesterday morning I got to have a sleep in and catch up with the girls at 0620hrs. But when the phone rang at a couple minutes past our meeting time and I was told we had the first flat for the morning I don't think any of us had any idea of what the remainder of our ride was going to be like.
So DRAMA No 1 was followed in quick succession by DRAMA No 2 and as the tyre was being re-inflated it decided to explode and go off like a gunshot in the night. We all squealed, jumped and then laughed as girls do and crossed our fingers ever so tightly when the second tyre was being re-inflated. Job done.
DRAMA No 3 was my turn. It's quite an odd sensation riding on a flat - it's like your sitting on a bag of Jelly - not that I would know what that feels like but I could only imagine that it would be the same. Only to add insult to injury it now started raining. 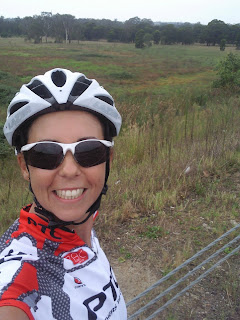 So with that done we set off again and Sarah and I started singing "Bohemian Rhapsody" as you do. It was a total crack up - haven't laughed that hard in ages and we would get to a certain point in the song forget the words then do the usual "nana na na na" when you don't know it and then pick up further down the lyrics. Classic. 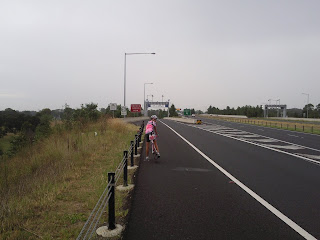 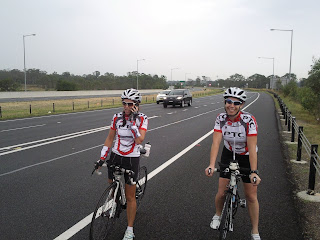 DRAMA No 4 was by far the worst. And if you ask Sarah and I what we slipped on I don't think we could tell you. I was at the front with Kylie and Sarah who was directly behind me was next to Cloe. I looked over my shoulder to give the all clear to cross over and before I knew it I had the death wobbles - I managed to stay upright and intact but poor Sarah who noticed that I was about to fall started to slow down and in the process of doing so hit the same "whatever patch of stuff" and came down on her right side almost taking out Cloe too. This was not good - very scary. Injury tally - grazes to right hand, elbow, upper arm, whopping bruise to hip. The bike was okay - a few scratches to the gear levers but all in all it held up well.
So after a much needed re-grouping we all took off again only to be told by Kylie that we had our 4th flat for the day - literally within 30 secs of taking off. DRAMA No 5. by this stage we were all deliriously tired and just burst out laughing. I mean really what else are you going to do. In the process of changing the tyre we managed to misplace the end screw off of the skewer so we were then rummaging around in the grass on the side of the M4. Totally hilarious. 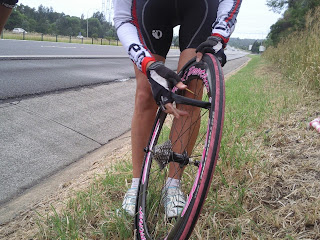 So anyway with that sorted we all decided to end up going home as we had had ENOUGH and we didn't want to play anymore. I decided to take a short cut home and as I did it bucketed down on me and I got another shard of glass stuck in my back wheel which caused a massive tear. That was it - I called Stephen and asked for him to come get his dear wife. I was spent - MENTALLY.
I thought that was it for my horribly eventful day but boy was I wrong. Mum called me about 3:30 in the afternoon and told me that a very dear friend of the family whom Mum has stayed in close contact with over the years, well pretty much since they all came to Australia over 40yrs ago, and whom I have only ever called Uncle was about to pass away. I had not seen him for many years but knew through Mum that he had been struggling with Cancer for quite a while. His hard fought battle sadly came to an end last night at 7:15pm and I felt privileged to have been able to spend his last hours with him and his family.
I cannot even begin to imagine the sadness and despair that my Aunt and cousins are feeling but only hope that time eases their pain. I know my Uncle is in a better place looking down on them and keeping them safe. His family was his life and now in his passing he will be forever their guardian angel. Love you Tio.
So needless to say I am glad that yesterday is over. I woke this morning to an image of myself in the mirror that was unrecognisable - eyes swollen like one of those googly eyed goldfish. I feel very flat emotionally and don't have any ZING. Not sure how windtrainer session will go this afternoon. I am not expecting anything great.
This weekend has also quite a harrowing experience for a few of our club members who have suffered falls and accidents. The recent rain I think has attributed to oily slippery roads. I am keeping you all in my thoughts and hoping that all your injuries heal up without too much delay so that you may resume training. Big hugs to you all.
So it is here I bid you all farewell. My fingers are tired from typing and I shall try to be more diligent with keeping up with everyone. My brain is fried.
Posted by Barbie at 9:31 AM 5 comments