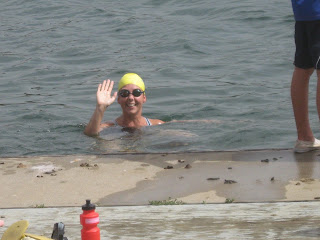 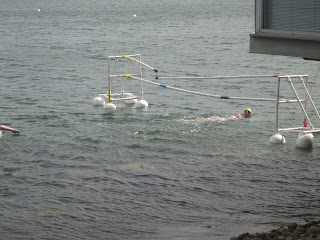 The "Have a go swim" on the 28th of November 2009 was set to be another memorable day. It was about 40 degrees celsius with quite strong winds that came in waves over the course of the day. I was loving the idea that soon I would be in the water. There is no better place to be when the earth is at its scorching best.

Once again I had my own personal cheer squad (Stephen, kids and mum)there for support. I was going to have to start paying them shortly for their time and efforts...lol. What would I do without them. When I doubt myself or am just feeling the nerves of an event their words of encouragement spur me on like no other.I don't know why I get so nervous, I have just always been that way. My fiercest competitor in the water has always been me. I was never happy with anything less than my best. And that was probably true for other aspects in my life. Sometimes that was a good trait but other times it left me deflated because I never felt I could live up to the standards that I had set for myself.

In the water though it was a different story. I knew I could just always squeeze out hard work cause it felt so natural. I knew I could do this 500m with my eyes shut. The murkiness of the water meant that even with goggles on it felt like my eyes were shut....literally. I couldnt wait. I wanted to see how I would go in open water. My time in a pool for the 500m distance was 8min 15 sec. Following a black line makes life so much easier in comparison to murkiness and close to zero visibility. Oh well, life is a challenge and I was going to prove to myself that I could do this.

As the starters gun went off I just thought to myself, stick to the guy on your left hand side. Keep him within view and he will set the pace to follow. What I didn't bank on was that I felt great in the water and taking the lead felt good too.He did push me all the way though. The choppiness of the water did not bother me one bit, it felt quite natural actually and I quite enjoyed not having to stop and do a tumbleturn every 50m. But you do get fatigued alot quicker too.

I started to feel my lack of stamina with about 100m to go and even though I was slightly lifting my head to visualise the finishing line I was going all over the place and that was sapping the energy right out of me. Needless to say, when I crossed the line first i was extremely excited but very tired. I finished with a time of 8min 17 secs. Not bad for no black line and murky, unchlorinated water. WooHoo. Bring on the 1km for my next challenge.

And bring on a Triathlon. I want to do a triathlon. This is my future goal and I will do it.
Posted by Barbie at 8:40 AM 0 comments