This time last year I entered the Cole Classic without any pre-conceived idea of what an ocean swim was like. I was all excited and very new to it all and just saw this as another step towards achieving my goal of my first Half Ironman.

This year I had a few failed attempts at ocean swimming to overcome and although excited about the prospect of doing this swim I was also hesitant in the fact that I could make it a habit of signing up and failing yet again. And I did not want this to be my reality.

I was pleased to say that I had an awesome night's sleep the night before and woke up fairly late for me - which is a real change of pace. Sarah came to pick me up and we made our way to Manly Beach with alot of laughs and giggles as only girls know how to do. 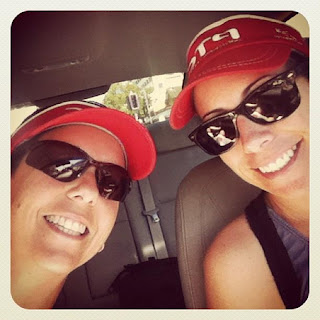 Now for anyone who know's what Manly is like with it's parking, it can be hard at the best of times to find a spot let alone when there is an event as big as the Cole Classic to contend with. Parking can literally drop to zero spots. But lucky us, just like last year we found a spot in almost the exact same spot - could this be a lucky sign? I think so.

This year the swim was an out and back from Shelley Beach due to big swell coming in on Manly. And believe me I was happy to find this out. The weather was absolutely perfect on Sunday. Bright blue skies, beautiful and toasty and slightly fresh water. Mind you if you had of seen me get in for the warm up you would have thought I was stepping into the Antarctic. 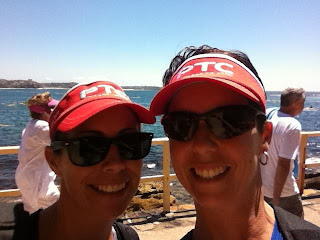 We caught up with Paul, Jennie, Louise & Andrew before our race, did our warm up swim and then before we knew it it was time for the start. I also caught up with Spot and Sarah as well from Bondi Fit who have helped me with my ocean swimming. It was nice to have Paul come over to the side and wish both Sarah and I luck and give me the support I needed. 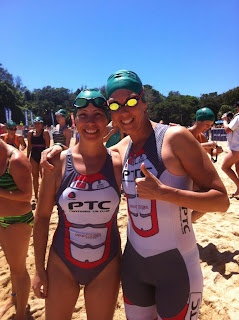 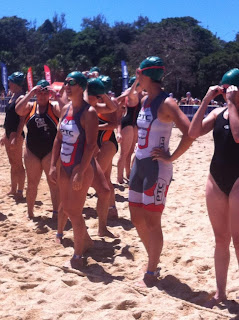 As I lined up at the start line my mind started doing its normal thing - racing at 1000 miles per hour. Can I do this? What happen's if you fail again? Why do you do this to yourself? But as the hooter went off and I made my way to the ocean, I thought to myself  "Stuff it, what have you got to lose. Atleast your trying". And with that I tacked onto Sarah from Bondi Fit's feet and hung on for as long as I could, which was only about 300m. As she swam away into the deep blue yonder she left behind her a mass of bubbles which slowly dissipated into nothingness. Much like what Marlin saw as the boat took off with Nemo. 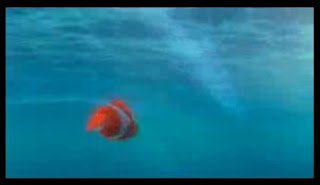 And with that I was on my own till Sarah my friend popped up beside me and said HI inbetween breaths and gave me a wave. I felt safe again and just tried to hang onto her for as long as I could. As we headed back to the turn around and into a mass of oncoming waves I remembered Paul's words "Nice long strokes". I tried, I really did but with the swell and current I really wasn't getting anywhere fast and it seemed the turning bouy was on my right hand side for ages.

But I dug deep and kept pulling out big long strokes and then made my way home. With every wave I swam over I could see I was getting closer to the finish line and was feeling very proud of me and all that I had accomplished. I not once felt sick or scared in there and knew that this could very well be MY turning point.

Coming into shore I manouvered my way over rocks and there was no running at the beginning, just a very dainty walk so as not to fall over. But then once I hit the sand I tried to run up it but all I could get out was a slow waddle and then I saw Spot. He took what I hope is a shot of me looking chuffed with myself and then I crossed the line only to hug Sarah at the finish line and hear the congrats from Paul and Jennie as they came over and gave me a hug. I also saw Sarah K and she can 2nd.

I was smashed - TOTALLY. But free of any defeatist attitude that was left within me. I then saw Lou cross the line in style and then caught up with Andrew, Joey and Kristy at the end. Everyone did really well. We finished the Cole Classic. Some in the Top 10, some with soldiers wounds, others as angels in the swell. But all of us accomplished a huge deal that day. We swam 2km at the Cole Classic with over 4000 other participants. ANd I really don't think it would have been possible without all of my family and friends support.

My time was 38:09. Three minutes slower than last year but I really couldn't care less. For me I felt like I swam 10 minutes faster because of what I accomplished. I felt like Super Woman. Now it's time to get back on the band wagon and keep pushing myself.

AND BELIEVE ME I WILL.
Posted by Barbie at 6:42 PM 1 comments