What an awesome weekend. I mean it helps having had most of the week off due to whatever it was that decided to invade my body and produce a gastric bug for a day. But this weekend was just too cool for words......so I will stop now.........hahahaha, nahhhh, will keep going.

The whole time I was swimming I couldn't help but think of today's ride. This Cobbitty ride has been revered as a tough ride, and if you can conquer Cobbitty, then you could pretty much do anything. Well I am "pleased as punch" to say that I did it, and it did not beat me. And I spent the morning with 3 friends to boot. Who all encouraged me every step of the way. 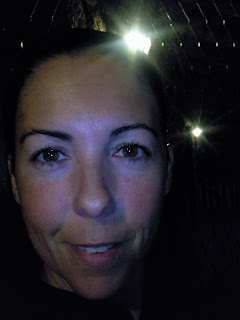 I started my morning at 0430 (bright n' early) as Elissa was getting to my house at 0530 so we could ride in to meet Cloe and Kate at 0630. The 12km ride in to the meeting point was a nice warm up ride for what lay ahead. Elissa and I had time to chat about how we were going to tackle it, and what we would possibly do should they not turn up. We even had the gall to contemplate a coffee pit stop in amongst it all. But no sooner did that thought cross our mind - up popped Kate first and then not too long after Cloe. 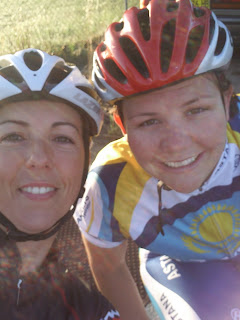 Off we set into the wild blue Cobbitty yonder. What lay ahead for me I could only imagine. I was scared and excited all rolled into one. As Kate and I chatted we got onto the topic of flat tyres and how neither of us had had to change a flat. Well guess what? The discussion of flat tyres should be avoided at all costs much like the word "Voldemort". Within ten minutes of our discussion I heard this almighty pop and a horrible clanging sound. I had a flat thanks to an almighty nail embedded in my rear tyre. Once again Cloe came to the rescue. Thankyou. The nail however had left a doozie of a V shaped tear in the tyre and I spent the remainder of my ride with my fingers crossed hoping that the second tube would not get punctured.

Now what can I say about this Cobbitty ride other than it's hard. The hills in it I can only compare to the Kiama ride. And believe me my mantra for most of this ride was "You did Kiama, you did Kiama". I couldn't even take photo's for fear of rolling back down some of the hills. They were just long, slow, steep, grinding hills and I only managed to walk for 100m on the last tough straight incline. The other stoppage I had I won't class as a stop because my feet didn't touch the ground. I rolled up to a metal guard rail and just hung on for about 90 secs and tried to make my heart rate come back to normal. It was tough. I am still totally gobsmacked as to how Cloe and Kate could talk going up these hills. I was trying to suck up as much oxygen as possible and would not even dare relinquish any of it. Maybe one day when I am fitter. 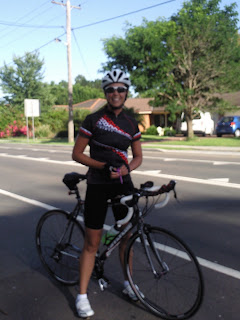 We stopped at two little townships to fill up our drink bottles and I can't explain how good it felt to actually rest for about 5 minutes in each pit stop. As we were heading back it felt nice to head down a nice steep hill and not have to pedal once. Actually I spent most of it putting on the break as I could see myself exceeding the 60km/hr from the Kiama ride easily, and this road does have alot of traffic - so I was a bit scared of being smooshed.

On the way home Elissa and I gave ourselves a High 5 because we were so damn proud of ourselves. Cloe gave me a call later and said how proud she was of us and our efforts. This means alot coming from someone who I aspire to be like and she is just the nicest person to boot.

I am now an official Cobbity-ite. This is too cool.