Well, today was the day. A memorable day. An epic day for many reasons.
Upon arriving at the local Fire Station here at Kiama at 0815hrs, 15 mins early as usual I was half contemplating turning around and going home. Not because I was worried about meeting up with everyone but simply because I wasn't sure if I was really ready to do this. You see the FireStation is situated at the top of that hill that I showed you the picture of and I knew deep down that this hill was going to be the one I would have to tackle. But soon after I arrived, another cyclist turned up and it was too late to back out. And not too long after that the rest turned up.

They are all the nicest group of people you could ever meet. They really took me under their wing and made sure I was well looked after. I was even happy to hang on the back of the line but they told me to hang up with the group so as to make sure I wouldn't get left behind.

Pretty soon we made our way onto the Motorway and we were riding along the coast weaving in and out of the local 'burbs'. The sights were just divine. 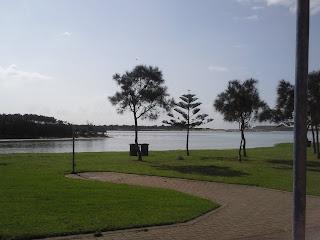 I was never short of someone to talk to along the way. They would keep dropping back to have a chat and ask how I was going, how I found out about the group, where I was from. They were so welcoming and made me feel like I had been truly accepted into their community. 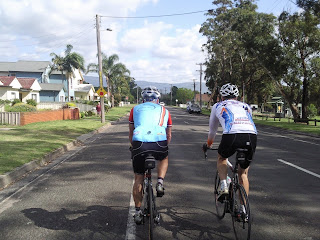 As the ride continued I found myself venturing further into the hillside. This is truly the most majestic landscape ever. I almost didn't feel like I was in Australia anymore, more like I was in Ireland or some other pristine countryside. It was just hills, hills and more green hills with loads of cows everywhere. Jerseys, Murray Greys, Belted Galloways, Freesians - you name it, the hills had it. Even the air changed aroma - from a cool salty sea breeze to the beautiful aroma's you would either love or hate from the countryside.

At the beginning of the ride I had decided that I would not do the massive hills but as the ride continued and we reached the roundabout that would decide whether you went the less hillier route or the scary hill route I chose to ride with the pack and see what I was made of. I was scared that I would not make it and make a total fool of myself, but there is no other way to find out then to just do it. So with that said I was faced with the first mammoth task. The next lot of photo's were taken from the car. I asked my husband if we could drive the route so I could take photo's to show you because there was no way I could take photos and struggle up these hills. 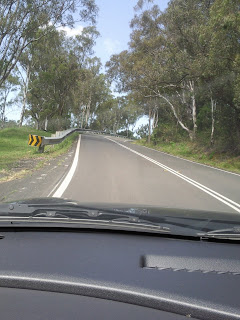 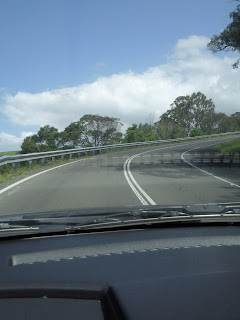 This hill went on for what seemed like forever. Just when I thought it was nearly finished we turned another corner and there was more. My legs were just trying to turn over and it was I must say very hard. I even had to stop at the halfway point just to regain my breath and take my inhaler. After a couple of minutes I was fine and managed to drag my sorry behind up the remainder of this hill. The upside to every hill that you climb is the downside and at one point my speedo clocked 60km/hr. I was flying and the others were flying so much faster. They are so much braver and stronger than me - I am in total awe of their strength and grit. 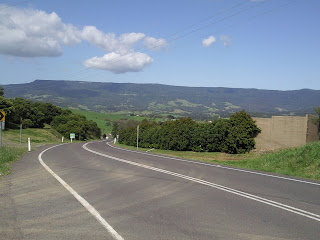 The next couple of hills probably weren't as bad in steepness value, but they just seemed to go on forever. The good thing was that everytime I got to the top there was someone there waiting for me. Not that I was ever left alone on any stretch of the ride. I always had someone riding behind me or to my side giving me words of encouragement.

The last hill had me seeing stars. One of them told me it was a 16% gradient hill. It was just insane - the next photos are snap shots along the way up taken in the car. Note the white car we were following even had to pull over for a rest. 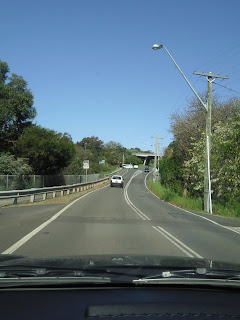 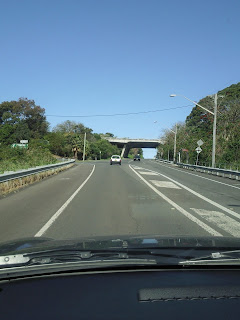 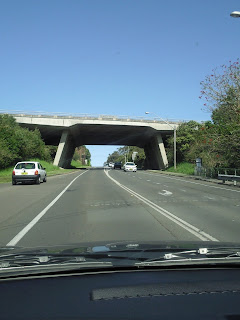 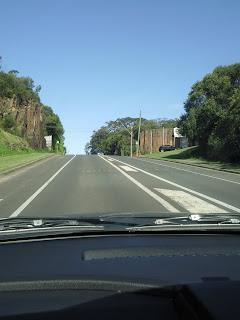 When I finally made it to the top they were all congratulating me for having accomplished a really tough ride. I felt like I had just accomplished my 70.3. But the best was still to come - COFFEE.

After 2hrs 45mins and 63km of riding I finally got to stop and enjoy a wonderful long black at the Kiama Lighthouse Coffee Shop. My coffee has never ever tasted so good. It was also a good chance to chat with them all without feeling totally stuffed and short of breath.

I also got to do a little networking with one of the riders Denise who is the sole distributor of Chamois Butt'r. I will definately be testing this product out for my sore hinny.

I would like to send out a sincere thankyou to you all for your kind nature and welcoming hearts. I will definately be coming back and hooking up for more rides in the future. You guys rock.
Posted by Barbie at 5:43 PM 7 comments