Yesterday was another tough session in the pool as it called for another 3.5km, with the 500m sets. I do feel though that I am getting better at the longer sets and seem to fall into a good pattern of breathing by about the second 500m. The first 500m always feels like a bit of a hard slog but once that initial warm-up is done it feels better.

I also had some sprints in there as well just to see if I had some left in the tank, and surprisingly I did. I have noticed that my shoulders are starting to get broad again, like when I was younger. I was a really skinny kid but had these very broad shoulders and my ballet teacher was always making me choose between swimming and ballet. Guess what I chose? Yep, you guessed it, I am a fish at heart.

So here is my session:
Those last 50's were hard and my times weren't to different from the easy to hard. I was kind of finishing them all on about 35-40 secs. When I finished up with it all and was heading to the change rooms my right ear started to ache. Not a piercing earache but rather a deep nagging pain that branched down into my neck. And as the day progressed it got worse to the point that I was feeling slightly deaf in that ear. The glands all on that side of my neck were tender to the touch, so I took some Nurofen, got a gentle neck rub and applied some heat. And this morning - hey presto, all gone. I know it's quite common to get sick when you are in training but I didn't want it to happen so early on in the piece - so I am very relieved that it has subsided.

Next on the program called for another 4km run. I chose to do it early this morning and I have decided that early morning runs are on the list for me. I felt so alive and my breathing was not at all laboured like it has been. It was cool but not too cold and there was just the right amount of humidity to make it okay on the lungs. There was one point at about the 3km mark where I was starting to get a bit tired and my favourite song came on "I am a woman" by Gabrielle Cilmi and it spurred me on and made my last bit feel effortless again.

I followed this up with a 1hr spin class and boy did this hurt. I could tell I hadn't been to a spin class in a while. And the fact that it was a new program didn't help one bit. The 3rd last song was one continuous hill climb with no recovery at all. You were either up and out of the saddle pushing hard or climbing that hill seated. It was murder but I kept repeating to myself - if you can climb the hills at Kiama you sure as hell can do this. And that is what I did. I drank 1.2litres of water during this session - I was dripping like a leaky faucet.

Needless to say when I got home I had a much deserved shower. One thing I have also noticed since upping my training is that my veins in my arms and hands are becoming much more pronounced. Not sure if it's a look I like but I think it may only get worse. What do you think? 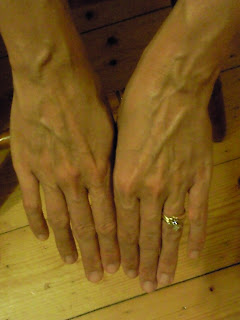 I thought I should also post a photo of my Tri Club. Take a look at yours truly - eye's shut. What a doofus. 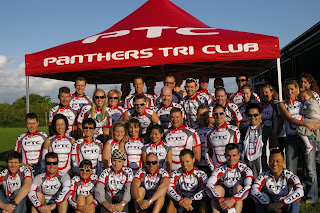